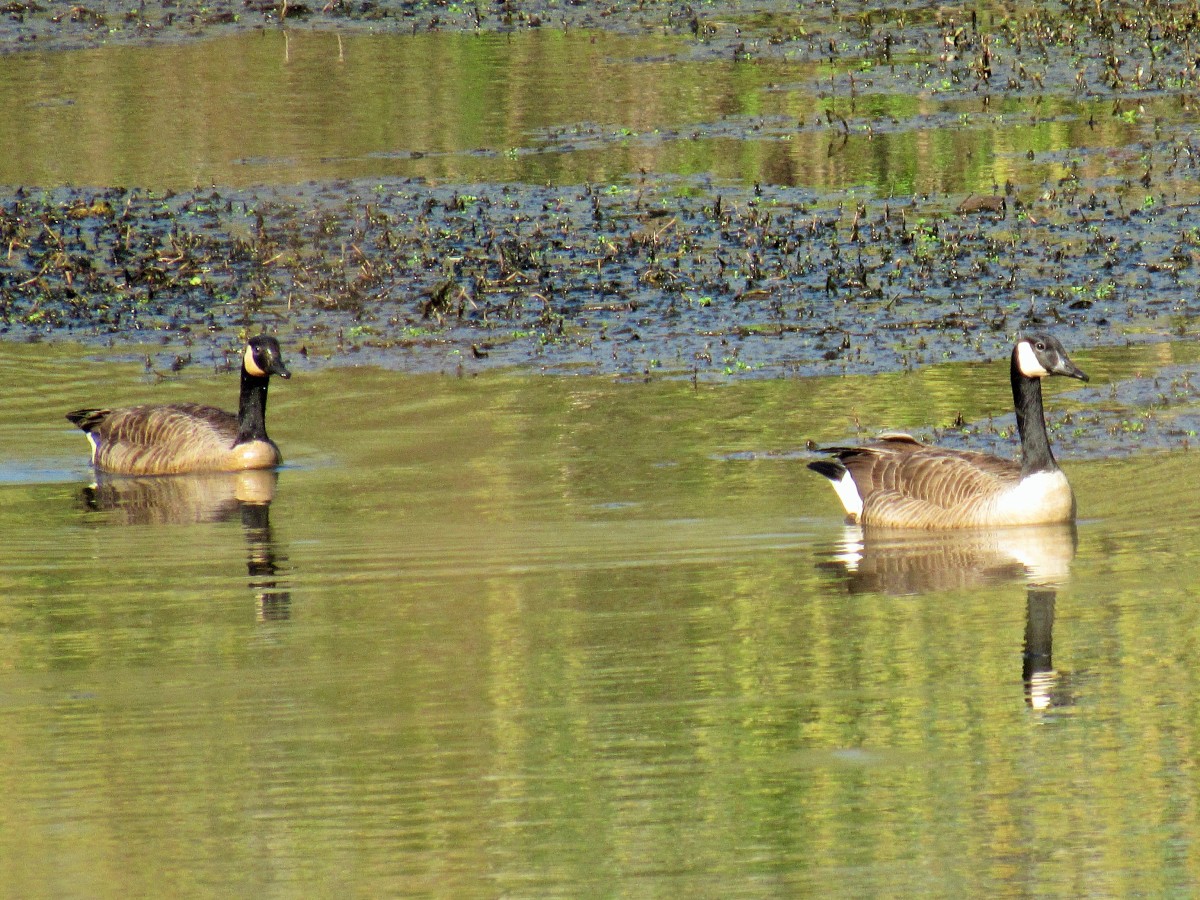 It might not feel like it to some of my northern friends, but winter is officially over and spring has begun!  I love this time of year, when fresh green leaves burst from their buds and flowering blooms erupt in a kaleidoscope of color.

On April 4th when the spring moon rises, it will be a blood moon—a total lunar eclipse. As the moon passes through the earth’s dark shadow, it will turn a rusty or red color. But don’t blink, because this eclipse will be over in a five short minutes. Here on the East coast (EDT) I’ll be checking the night sky at 2:01 AM on Saturday morning. Click here to find out the best time to catch sight of the blood moon in your area.

Like all moons, April’s full moon has many names.The most common is the Spring Moon, for obvious reasons. To the Abenaki it is the Sugar Moon (now my mouth is watering for some real maple syrup).

Along with other flowery names, it is also known as the Pink moon, named for the pink flox that burst into bloom in early spring.

But it’s most common name among Native Americans has to do with geese. It is the Moon When Geese Lay Their Eggs, the Gray Goose Moon, and Moon when Geese Return in Scattered Formation. If you’ve stumbled upon my #PhotographyJourney on Instagram, Facebook or my website, then you have already guessed these are my favorites.

The goose thrusts his feet forward and spreads his wings, pulling them back to slow his descent. Water splashes up around him, sending rippling waves across the surface of the lake. There is another splash beside him as his mate lands.

Together they glide across the lake toward the tall green grass growing along a small island in the center of the lake. This has been their nesting site for the past three years and he is anxious to claim it once again.

The sun has disappeared behind the trees as they step onto the island, shake the water from their tail feathers and waddle up the embankment. A crow caws from a nearby tree, breaking the stillness of the evening, then flies off leaving them alone on their island.

Despite the rapidly darkening sky, his mate begins gathering twigs and grass to start the nest. The gander returns to the water, dipping his head beneath the surface to nibble on the tender water plants. He spots movement at the edge of the water and glides over to investigate. A raccoon looks up. Their eyes meet and the gander circles away, moving silently through the water. He waits until the raccoon is gone before he turns back to the island. Although his mate has yet to lay her eggs he is not willing to risk exposing the location of the nest. 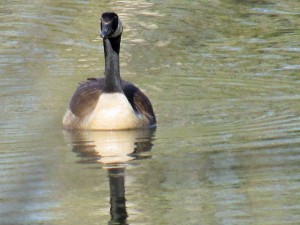 The light of the full moon shimmers on the now smooth lake surface as he settles in beside her. He tucks his beak beneath his wing. Tomorrow they will finish the nest. He closes his eyes and drifts off to sleep dreaming of the fluffy yellow and gray goslings that will soon trail behind him as he sails across the lake.

I’ll be working in the ER during this full moon, but I’ll sneak outside to soak up a bit of the Moon when Geese Lay Their Eggs so that I can absorb a refreshing burst of spring inspiration while I continue my work on the sequel to Troubled Spirits.

Don’t miss this full moon and if you manage to snap a shot of the blood moon, please share in the comment section below. I’d love to see it!

I originally wrote this blog as a guest post for Sapphyria’s Book Review. You can see the original post here.

Are you a runner? Illustrator? Gardener? Jewelry maker? Or are you a writer, like me? Whatever it is, finding something to inspire you is essential to success. Your inspiration can come from anywhere.  For the runner it may be passing the woman in the pink shirt. The illustrator may spot a tree, which looks like a fish. The gardener may find inspiration in jewelry and the jeweler in the garden

As a writer, my inspiration sometimes comes from the familiar. My first story was inspired by my childhood adventures.  But Troubled Spirits was inspired by something unfamiliar—ghost hunting.

A group of my ER co-workers were planning an excursion into one of the older hospital buildings and they invited me to join them. My brain formulated the word no, but what I heard my mouth saying was yes. And in that moment, a seed was planted. The seed which would grow into Troubled Spirits.  What if a group of teenagers decided to try their hand at ghost hunting? But what if the ghost didn’t want to be hunted?

Although the hospital shot down any possibility of a ghostly excursion into any of their buildings, our little group huddled together in an empty ER room with a spirit box. Not only was that an experience I’ll never forget, it was the inspiration for the scene in the school cafeteria when Logan’s spirit box….

I decided to set Troubled Spirits in a haunted school instead of a hospital. And then another ‘what if?’ popped into my head. What if there was an actual haunted school in Maine?  I scoured the internet and discovered there was one Maine school rumored to be haunted:

“According to legend back in the 1950’s 5 young high school boys were murdered mysteriously at the school. No one knows who did it. Ever since late at night when you’re walking the track behind the school you’ll see glimpses of lights going on and off and hear strange noises if your near the school even feel like you’re being watched. There is also 2 graveyards near the school which also have many hauntings. Like the old man in the graveyard path whom is dark tall you speak to him and he just stares at you then vanishes into thin air.”
Source: http://www.theshadowlands.net

I went back to the internet in search of details, but all I found was this same paragraph on various websites. So I decided to take action. Along with a friend, I jumped into my car and made the two hour trip to investigate in person. We visited the “haunted” school. We visited the library. I searched through books about the town history. Finally, I spoke with the librarian. Yes, he’d heard of the rumors, but assured me they were just that—rumors. But I wasn’t done with my investigation. We visited every cemetery we could find, searching for the gravestones of teenaged boys who died in the 50’s. There were none. Not one!

Although I was disappointed that I hadn’t proven the rumor to be true, I’d gathered up bunches of inspiration along the way. I now had a model (adapted slightly) for not only the Caldwell School, but also the library.  Because the town which inspired Shady Cove is a coastal town, many of the older gravestones belonged to captains. And these gravestones were the inspiration for the short story found within the pages of Troubled Spirits titled The Captain.

What I learned while writing Troubled Spirits is that inspiration can come from any place. Sometimes it comes when you’re not looking and sometimes you need to go looking for it. So be ready. The inspiration for your success might be right in front of you, or waiting for you around the next corner.  I’d love to hear about what inspires you!

I love the night sky. Even on the coldest night, if the sky is clear, I slow down or even stop to gaze up at the stars.  Right now the sky is hidden behind the clouds of the first storm of 2015, but I’m hoping that those clouds will disappear at least long enough to provide a glimpse of the moon. Because tonight the first full moon of the year will rise—the Wolf Moon.

The Wolf Moon has other names. To the Celtics, it is the Quiet Moon, symbolizing a time to stay home. The colonial Americans referred to it as the Winter Moon. To the Neo Pagans it is the Ice Moon. The Native Americans have many names for it: the Cold Moon, the Cooking Moon, the Hunger Moon, or Moon of the Terrible. But the Wolf Moon is its most common name.

It’s winter and the ground is hidden beneath a blanket of snow. Burrowed beneath the blanket, many creatures are nestled in their dens for the winter’s slumber. But the wolf is not sleeping. He is hunting. His food is scarce and the darkness brings with it the end of another day of hunger.  He raises his voice and howls at the rising moon. And then he stops. The wind has carried a new scent to his nose. The scent of food…and man. He fears the man, but his hunger is greater than his fear. The Wolf Moon lights his path as he follows the scent to the village. Here the man-smell is stronger. Firelight flickers within their dwellings. But the savory smell of livestock draws him closer to the village. He slinks into the shadows and strikes in silence, then slips away with his prey. Once his hunger is satisfied, he looks up at the sky and howls his thanks to the Wolf Moon. 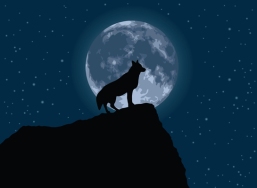 Tonight when I gaze into the night sky, I will join the wolves in their howls to the Wolf Moon. And maybe the wind will carry the scent of inspiration to me and satisfy my hunger to write.